In the last post I talked about two material that can be used to print 3D models, WSF and FUD, and two features found on 3D models, Walls and Wires.  There are three more concepts that you have to consider when designing a 3D model, Embossed Details, Engraved Details and Clearance between parts.  Their names are fairly self explanatory. 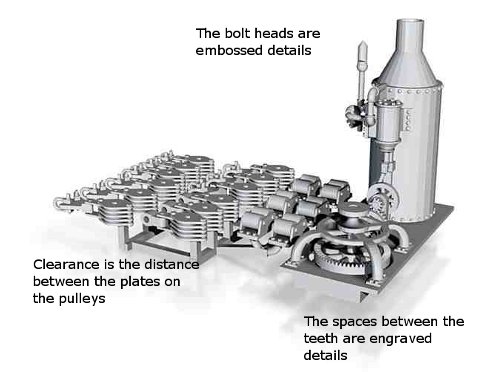 The bolt heads stick up, and are embossed details.  The space between the gear teeth goes down, and are engraved details (although you could say it’s the teeth that are sticking up).  Each pulley has several stacked plates.  The distance between he plates is the clearance.  In fact, on some of the pulleys the clevis are actually separate parts that interlock with the pulleys, and move.

To give an idea of size, here are a couple of pulleys sitting on a US Quarter.  If you check the chart from the last post (or the metric version) for the FUD material you will see the sizes allowed in the various scales for embossed and engraved detail, and the clearance required between parts.  On these HO scale pulleys, you only need about .2 scale inches.  Yes, that’s a decimal point in front of the “2.” That miniscule minimum clearance is why the clevises can move.

That gives us enough background to start talking about the actual design process.  Next time we will actually begin designing a 3D scale model.

Currently an attorney, I am also a retired police officer and the father of a teen age daughter. In between work and family I sneak in a little time to do 3D modeling. I live in Connecticut and am a member of the Valley HO Trak modular model railroad club. View all posts by dcyale